Covered bridges seem to exude an undeniable romanticism. Waterways babble below, the roofs above offer cool respite from the summer sun, and soft rays of sunlight peek through the lattice trusses, which frame picturesque views. There’s something about covered bridges that makes us want to slow down, stop the car, walk upon the aged wood in the shade of the timber eaves and experience a taste of the past. These authentic 19th- and early 20th-century timber-truss bridges were originally covered to protect the wood and pedestrians from weather and to keep trade route horses from shying away from the water, but more importantly, these bridges reveal a trail to our local heritage and culture. Old Easley Bridge has been in continuous use since it was constructed in 1927, save a few small repairs.

Often considered engineering and architectural masterpieces, covered bridges are slowly fading away due to neglect or demolition for new, modern designs. Groups like the National Society for the Preservation of Covered Bridges have even formed with the mission of saving historic covered bridges and gathering and recording knowledge of the history of these national treasures. There used to be nearly 100 covered bridges in Alabama, there are currently closer to 20 — 11 of which are on the National Register of Historic Places or the Alabama Register of Landmarks and Heritage. These architectural wonders offer glimpses into our rich history, as well as a gorgeous roadside stop where one can enjoy a picnic along a creek. And what better time of year to take a Sunday drive to take in these rural gems? That’s why we visited five of our state’s beautiful covered bridges to give you a taste of Alabama’s history and architectural richness. The Kymulga Bridge is at Kymulga Grist Mill & Park in Childersburg.

Built in 1858 by a man named Horace King, the Kymulga Bridge spans the Talladega Creek by 105 feet. “Horace King won his freedom from slavery because he became a well-known bridge builder in the South,” says Ben Austin, caretaker at the Kymulga Grist Mill & Park in Childersburg, where he not only tends to the upkeep of the park’s trails and campgrounds, but also serves as an events coordinator for the many weddings and parties held there. “The bridge is 158 this year,” says Ben. “It has no center support. It stands because of the way the trusses are set down on the side walls. And it is all original, except for the tin that we added for economic and liability reasons.”

The bridge was originally built as part of what was known as the Georgia Road. People would come southwest from Rome, GA, where the Coosa River starts, and eventually come across this bridge toward Wetumpka, where they still have a road listed as Georgia Road. “It was also used by the Muscogee Indians in their trade route,” says Ben. “And, eventually, the government came in here and built a munitions plant, and the bridge was used as a secret entrance into the plant, because it was part of the Manhattan Project.” “Horace King won his freedom from slavery because he became a well-known bridge builder in the South,” says caretaker Ben Austin of the Kymulga Bridge’s maker. 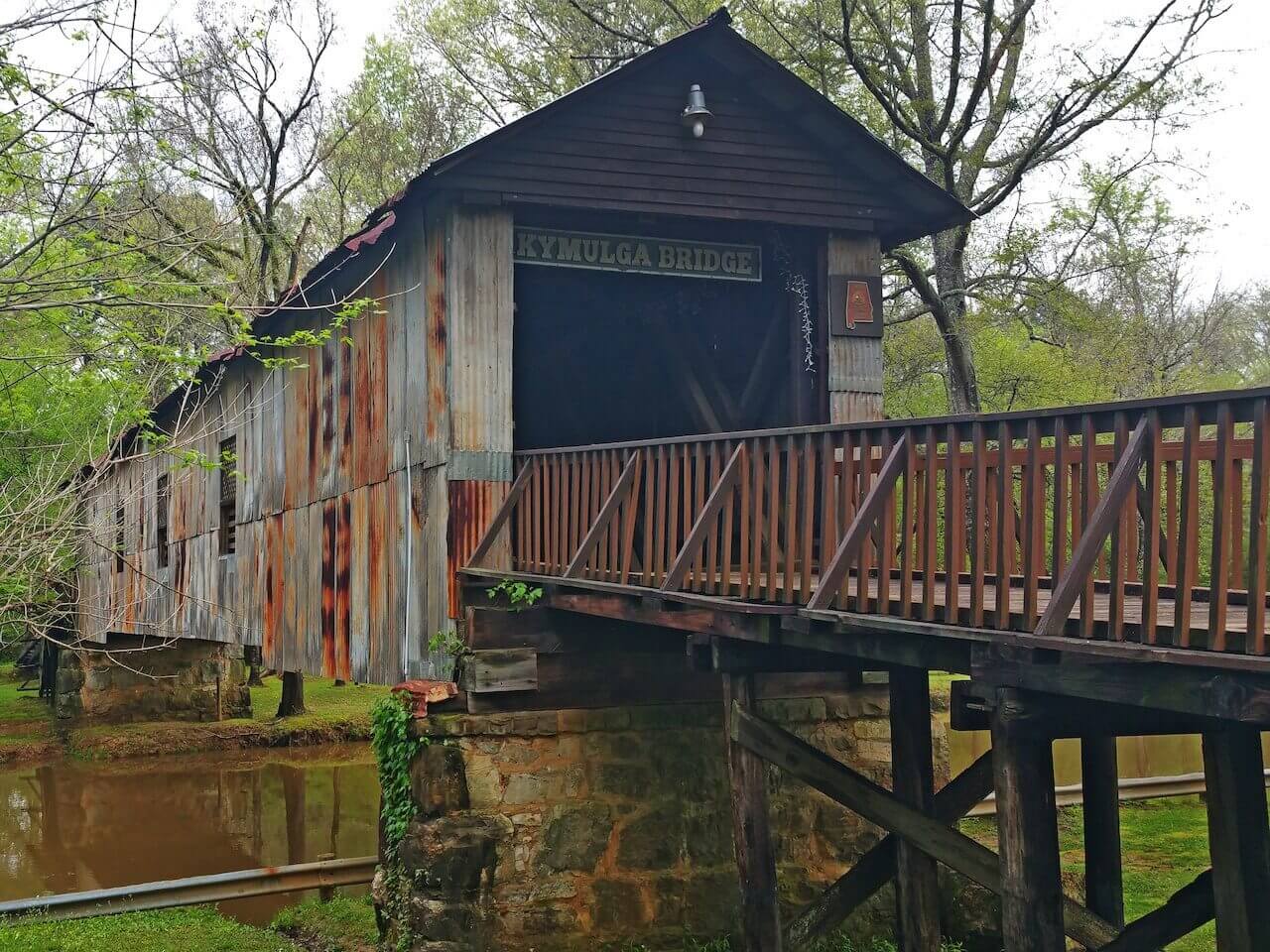 The tin siding of the Kymulga Bridge was added for economic and liability reasons. The Kymulga Bridge stretches 105 feet across the Talladega Creek. The Kymulga Grist Mill is part of this scenic enclave and was in operation until recently. The grist mill is situated beside a charming little amphitheater, where bands play during the park’s events, such as the annual Kymulga Grits Festival in April.

Listed on the National Register of Historic Places and towering 70 feet above the Calvert Prong of the Little Warrior River, the Horton Mill Bridge is the highest covered bridge above any U.S. waterway. The original bridge was built in 1894 at the base of Sand Mountain, less than a mile downstream from its current location, allowing the residents of Sand Mountain easy access to neighboring Oneonta and Horton’s Mill & General Store, owned by Thurman Horton, for whom the bridge was named. In 1934, the bridge was rebuilt by a descendant of Horton, Talmedge Horton. The construction crew of 15 men was led by foreman Zelma C. Tidwell, who was instrumental in the creation of three other historic bridges in Blount County — Easley, Nectar and Swann. Once threatened by vandalism, the bridge was briefly closed for repairs and restoration. The one-lane bridge is now open to traffic passing at no more than 5 mph. Horton Mill Bridge is the highest covered bridge above any U.S. waterway. Foreman Zelma C. Tidwell was instrumental in the construction of three other historic bridges in Blount County — Easley, Nectar and Swann. A furry friend explores the bridge. Built in 1933 over a scenic gorge in the Locust Fork of the Black Warrior River on property then the Swann Farm, this bridge connected Cleveland with the nearby town of Joy, which is why it was originally known as the Joy Bridge, and still sometimes referred to as the Swann-Joy Bridge. At 324 feet long, this wood-and-metal bridge is one of the longest in the United States. This treasure, which is on the National Register of Historic Places, is open to traffic and has room for parking, so visitors can walk across or under the historic, one-lane bridge. Sometimes referred to as the Swann-Joy Bridge, this covered bridge was constructed in 1933 to connect the town of Cleveland to the town of Joy. At 324 feet long, this Alabama bridge is one of the longest covered bridges in the United States.

Lovely latticework fills the walkway with geometric shapes in shadow and light. The gorge at the Locust Fork in the Black Warrior River is breathtakingly beautiful.

In 1927, foremen Forest Tidwell and his nephew, Zelma C. Tidwell, led a construction crew in building the Old Easley Bridge, also known as the Rosa Covered Bridge, across the Dub Branch of the Calvert Prong of the Little Warrior River. Zelma — who also led the construction of the Swann and Horton Mill covered bridges — displays his craftsmanship in bridge-building in the Old Easley bridge, which has been in continuous use since it was constructed in 1927, save a few small repairs. Listed on the National Register of Historic Places and the Alabama Register of Landmarks and Heritage, it is the oldest and shortest of the three historic covered bridges still in existence in Blount County. Old Easley Bridge is the oldest and shortest of the three historic covered bridges still in existence in Blount County. The interior of a covered bridge offers respite from the summer sun!

Off of Eastern Valley Road at the southwest entrance to Tannehill Valley Estates subdivision, McCalla, AL

Located near the Tannehill Ironworks Historical State Park in McCalla, the Tannehill Valley Estates Bridge is situated across Mill Creek and is not far from the John Wesley Hall Grist Mill, which is in the state park. This picturesque bridge was built in 1972, and while it doesn’t have the same long history that the other bridges do, the area certainly does. It was originally settled in the 1830s as a small farming community before locals realized they stood on land that held the three key ingredients for making pig iron: coal, limestone and iron ore. Tannehill then became home to Birmingham’s first blast furnace. In 1865, in the throes of the Civil War, Union Gen. James H. Wilson and his raiders destroyed the area’s furnaces and support structures. Visit the Tannehill State Park museum for more information on the area’s rich history, and enjoy a walk on the trails or a picnic in the pavilion while you’re at it! Tannehill Valley Estates Bridge has convenient side walkways for pedestrians. Tannehill Valley Estates Bridge, built in 1972, is a taller, loftier structure than the older historic bridges. The aptly named bridge is situated in the valley entrance to the hilltop Tannehill Valley Estates subdivision.

So pack up a picnic and meander through the countryside on a Sunday joyride to visit some of Alabama’s historic covered bridges!