What once served as a meat-packing facility is now a collection of modern luxury apartments and much more. Here's everything you need to know about Armour & Co., downtown Birmingham's newest mixed-use development.

One of Birmingham’s oldest standing buildings is set to become one of the newest – and most unique — mixed-use downtown developments. The Armour & Co. building, located at 2309 First Avenue North, was built in the early 1900s to serve as a meat-packing facility. Now, thanks to Christopher Architecture & Interiors and Blackstone Construction, it’s being transformed to offer Birmingham residents modern luxury apartments and much more.

“It’s really unique to have a building that’s so fresh that feels so historic as well,” says Caroline Thomas, Director of Special Projects at Christopher Architecture & Interiors.

The project was developed in coordination with Premium Property Trust, a real estate investment firm in Birmingham focused on premium lifestyle community properties. The Armour & Co. lofts add to the growing number of residential and mixed-use developments that have helped to spark a renaissance for downtown Birmingham.

Caroline says that for her and her colleagues at Christopher Architecture & Interiors, it’s been exciting to “think creatively on how to use this building and keep it true to its historic roots.” She adds, “It’s really important not to let these properties that have been sitting ducks for a while go to waste.”

Whether you’re in the market for a new place to live or you’re just interested in downtown nightlife, there’s SO much to know about Armour & Co. — both about the building’s history and the future of this new development.

Armour & Co. was once one of the country’s largest meatpacking companies. The building was first occupied in 1911. Records show that in 1951, the building housed offices, storage, and a working factory serving as a “branch house” distribution center for local stores. Once changes in the industry and transportation allowed stores to get meat directly from major warehouses and meatpacking plants, the need for local branch houses like Armour & Co. declined. In recent years, the building briefly housed a photo studio called Omni Studios but has been mostly vacant since its meatpacking days. Built in the early 1900s and first occupied in 1911, Armour & Co. was once one of the country’s largest meatpacking companies.

The mixed-use development at Armour & Co. has been in the works for years. Christopher Architecture & Interiors purchased the 43,000-square-foot building in 2016, and construction began the year after. In 2018 the redevelopment project was approved for both federal and state historic tax credits with additional incentives allocated in 2019 by the Alabama Historical Commission.

The design team added some space on the top of the structure to bring the building up to 54,000 square feet, and now, the building offers 20 luxury loft apartments as well as commercial space. Residents were finally able to begin moving in January 2022 and all units and other amenities should be complete by late spring. At Armour & Co., no two apartments are exactly alike. Fun Fact: There’s an old cattle pen in the middle of the building! The Alabama Historical Commission required that the design team and construction crew not remove the cow pen that was left inside Armour & Co.; plans are in the works to turn the structure into an indoor garden to offer residents green space and a common area where they can get to know their neighbors.

The building has gotten a makeover but not a facelift. The Alabama Historical Commission restricted the design team from changing the front façade of the building. This meant they couldn’t cut additional windows into the front of the building. So, the team had to get creative and create unique floor plans for each unit to be sure all apartments had some access to natural light.

Part of the commercial space on the ground floor of the building is being reserved for a restaurant. Another portion may be turned into a coffee shop. And there are plans to build a speakeasy in the basement. All of these amenities will be open to the public, but the building also offers private amenities like a rooftop event room and patio for residents only.

Armour & Co. is walking distance from favorite hangout spots — restaurants like The Essential and Bamboo on 2nd and popular bars like Carrigan’s and The Collins Bar are all close by. Don’t you love the building’s central atrium?! The skylight is the main way the building offers natural light to residents whose units don’t have many windows. 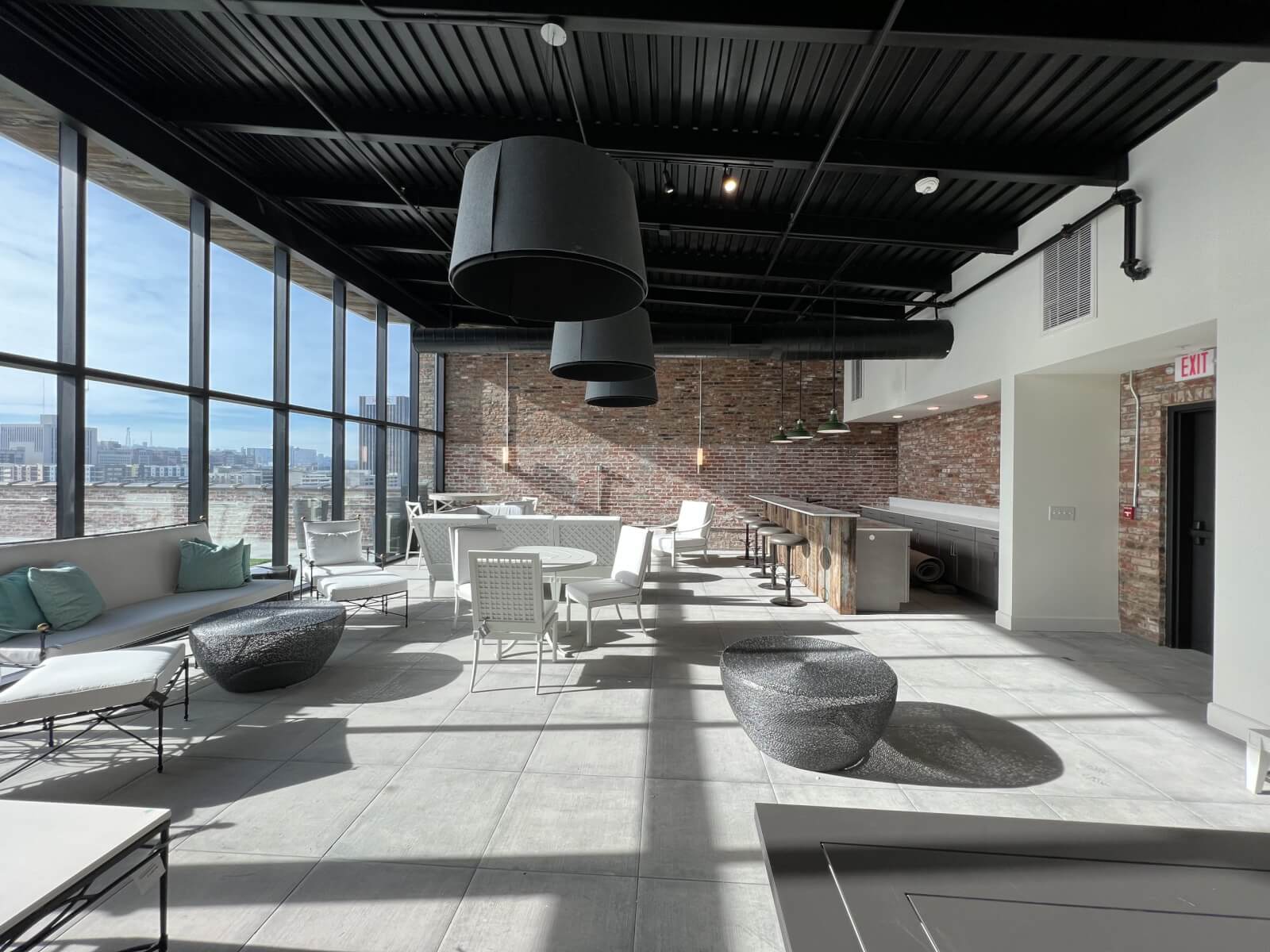 The rooftop event space is just one of the many amenities Armour & Co. offers residents. The rooftop patio offers panoramic views of the city.

RELATED: Take a Driving Tour of These 14 Historic Birmingham Buildings

Matt Jaeger, Director of Operations for Premium Property Management — the real estate company handling the leasing and management of the units – says that it’s the historic element of Armour & Co. that seems to appeal to most people interested in the building. “It’s a neat mix of the historic – a really old building and really old materials — and cool modern touches,” he says. “But they all fit together. It doesn’t feel like a harsh juxtaposition. It’s a very natural convergence.”

Armour & Co. has proven itself welcome among the ranks of downtown developments giving Birmingham residents a place to live, work, or play within the walls and halls of history. “I think the best compliment I’ve gotten from a prospective renter,” Matt says, “was that this just feels like Birmingham.”

Subscribe to StyleBlueprint for more intel on your favorite Birmingham neighborhoods!