These five Birmingham luncheonettes are long-standing, crowd-pleasing favorites that take any Magic City native back in time. These charming eateries boast humble, yet delicious, fare, familiar ambience and friendly smiles that fill our bellies and warm our hearts.

There are some eateries that feel frozen in time, where familiar faces come and go with easy hellos and a timeless charm always draws you in. They are neighborhood standbys, where each bite evokes memories of your own past sitting in those same seats where your parents brought you to eat, where you are tempted to get the cheese curls or the milkshake, because only in that place, your inner child is abuzz.

These five Birmingham luncheonettes are long-standing local favorites that have served generations. The crowd-pleasing hubs boast hardworking, friendly owners who aren’t focused on culinary prowess or James Beard-level accolades. They all have one thing in common: You. What they each love most about their establishments is the people that they have watched walk through the doors over the years.

Today, we’re traveling back in time to the local lunch spots that have won over generations of adoring Birmingham customers.

A  hole-in-the-wall could be considered an accurate description for this humble hot spot of 47 years. At Sam’s Super Samwiches, loyal followers form a line every day for lunch at its building in downtown Homewood. In the ’80s, one of the regulars was Birmingham native Courtney Cox. “She used to come here all the time. We used to call her ‘Cece,’” says owner Sam Graphos. “She worked at a video store on Hollywood Boulevard and would come here on her breaks. She was bored to death.” Sam grew up in the industry, running around his father’s restaurant, the Farmer’s Café, in downtown Birmingham. “My brother and I, years ago, started Sneaky Pete’s. Then I started this place,” says Sam. While proud of the handmade hamburgers, Sam is most enamored with the community that gathers at his unassuming sandwich joint. “I love the people most. I know all the regulars,” says Sam. “I’m here every day, six days a week.” 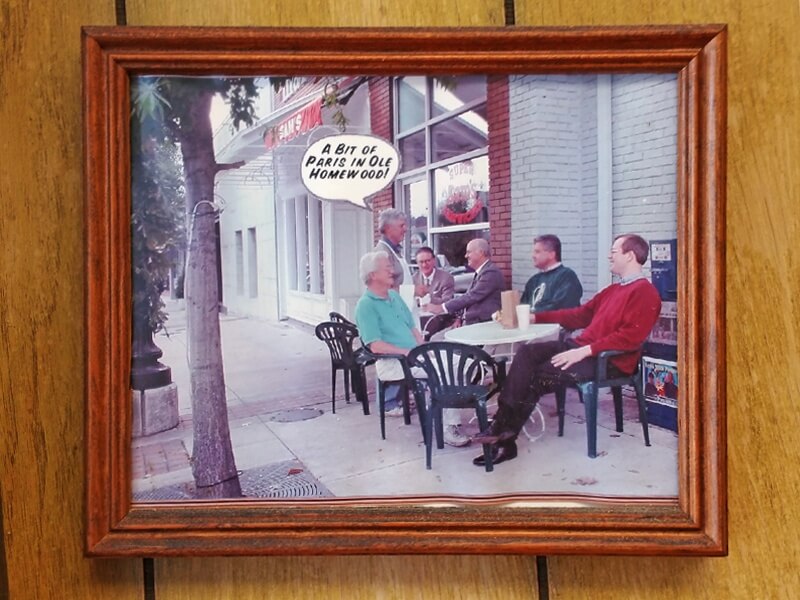 A framed photo of Sam enjoying his customer-friends out front The back entrance of the galley-style neighborhood sandwich shop

Walking into Gilchrist is like walking into a Norman Rockwell painting. Newborns and their mothers sit alongside teenagers and their grandparents at the 87-year-old soda fountain. “When they started building Mountain Brook, they built this building first,” says owner Leon Rosato of the beloved luncheonette, which was founded by Doc Gilchrist in 1928 as a combined pharmacy and soda fountain. Gilchrist proudly served its still-famous, freshly squeezed limeade to one 9-year-old in town named Elizabeth, who eventually became an employee at the age of 18 and still works behind the counter two days a week. “People just love to see her,” says Leon. “We are on our fourth generation of customers. They treat us so good. And seeing the kids that come in after school and watching them grow up here … the kids that were in elementary school when I started are all married now, and they’re having kids and bringing in their kids.” Gilchrist was the first building built in Mountain Brook Village, and Gilchrist remains in its original location. “They kept the old soda fountain,“ says owner Leon Rosato of Gilchrist, which began as a pharmacy and soda fountain. “It’s still all original.”

Repeat luncheonette offender Courtney Cox drops by Gilchrist when she comes home to visit. “She always gets limeade, and she loves the egg salad sandwiches,” says Leon. Another popular menu item is the BLT-pimento cheese sandwich. “It has our homemade pimento cheese, nice and crispy bacon, fresh green leaf lettuce—and we go out to the Finley Avenue farmer’s market to get our tomatoes, so it’s the ripest, reddest tomato you can get. So when we put all those ingredients into that sandwich, it’s just an outstanding sandwich.” A charming antique Coca-Cola sign hangs on the wall. Owner Leon Rosato recalls a funny story about his hardworking staff that a customer once told him, saying, “One of the local pastors came in one Saturday when we were really busy and our employees were working very hard. Well, the next day, he started his sermon by saying, ‘Well, the first thing I want to do is say a prayer for the employees at Gilchrist, because they are working so hard and they need some prayers.'”

Situated along the sunny crest of Bluff Park, Mr. P’s Butcher Shop & Deli opened in 1975 as a grocery store with only five bar stools and a small lunch counter to serve sandwiches, made with fresh meat from their butcher counter. As mom-and-pop grocery stores struggled as an industry, owner Charles Pilleteri, known to his customers as “Mr. P,” decided to make a change. “In 1995, I cut back on the grocery items and made half of the store tables and chairs and a few booths,” says Mr. P. “The business increased 20 percent, and we started getting many more lunchtime customers. Our business has increased every year since then.” The seating area of Mr. P’s is adorned with signed jerseys. Many famous football players and local high school teams frequent the deli.

The butcher shop and deli attracts locals devoted to quality meats, as well as sandwich lovers. With their homemade Italian sausage they make the very popular homemade Italian sausage sandwich, which competes for most-ordered sandwich with Mr. P’s muffaletta, with homemade olive salad. Mr. P also recommends the 1/3-pound burger of 100 percent ground sirloin steak with Pilleteri’s Marinade and Rub. Marinades and rubs bearing the Pilleteri name can be found in grocery stores throughout Alabama, and are in Mr. P’s shop alongside other local products that the proud Alabamian also promotes.

Not a customer walks through the door that Mr. P doesn’t kindly greet with a “Thank you for coming in today!” He is most thankful for his customers of the past 40 years. “I get to see their children grow up, and many of them are now bringing their children to Mr. P’s,” he says. “These customers are more like family to us. That’s a good feeling.” Mr. P and his staff at Mr. P’s Deli in Bluff Park The site of Mr. P’s used to be the only rest stop and a popular gathering place when Shades Crest Road was an old dirt road and the only way to pass through on the mountain.

“Me and my business partner took over the one-year-old business in April of 1983,” says Terry Green of Vestavia Hills’ longstanding luncheonette, which began as a wine shop with a few tables. A diverse selection of local craft brews and foreign beers joined the wine shop, which was pushed to the shelves on the walls to make room for the busy lunch crowd. “There are no better customers than at the Diplomat,” claims Terry. “We have so many regulars. People you see every week. A lot of people, we see three or four times a week. And the families—back when we first got into the business, people were bringing their babies in. Now their babies are bringing their babies in.” The entrance of the Diplomat Deli, where diners can enjoy the front patio area

The Reuben is the most popular menu item, rivaled by the Senator, the Hot Manhattan and the muffaletta. Terry’s favorite is the pimento cheese BLT. And people love 20-year Diplomat server Teresa. “She’s kind of a fixture,” Terry smiles. “There’s always a lot of laughing and joking going on between myself and the customers. I don’t allow anyone to leave angry.” The Diplomat Deli before the lunch crowd pours in The Diplomat Deli has a wide range of beers that dining customers can choose from the coolers, or customers dropping by can build their own six pack.

Opened by owner William Box’s father when pharmacies always included a soda fountain, 54-year-old Green Valley Drugs is the oldest surviving business in Hoover. Still situated in the back corner of the pharmacy, the tiny, old-fashioned eatery has a big reputation for its delicious cheeseburger with fries and thick, creamy milkshakes. “I love the customers, the old-timers that have been coming here forever,” says soda fountain manager Terry Payne of their loyal lunch crowd. The original counter at Green Valley Drugs in Hoover The extensive stuffed animal section was originally curated by Ms. Torrencie Bailey, because she loved seeing the children enjoy themselves in the shop.

“I came here in 1968,” says soda fountain manager Bobbie Epperson, who’s right at home amidst the eatery’s ’60s-era charm. “I love my boss man and his wife. I worked for his dad before he took over. They’ve just been so good to me. He just loves us all and he takes care of us.” Bobbie’s daughter and granddaughter have also worked at the counter.

Bobbie’s youngest granddaughter recalls going behind the cashier counter to help Ms. Torrencie Bailey, a beloved longtime presence at Green Valley Drugs. “If anybody was well known around here, it was her,” says Terry. “People would line up to speak to her. She worked until the day she died, and she was 96. She was so full of spirit and always smiling and working, going 90-to-nothing.” Keep up with other fantastic Birmingham eateries with our SB App, available for download here.